When 32-year-old Delhi-based digital art creator Amrit Pal Singh, minted or created his first NFT or non-fungible token this February, he wasn’t well versed with the technology behind it. But his NFT, a signature digital toy face of the artist Frida Kahlo, sold for around 3.9 Ethereum (ETH) (approx Rs 6,63,651). Since then, Singh has tasted growing success in the world of NFTs.

Singh, who has nearly nine years of experience in 3D art, has found his toy face designs are selling well on platforms such as Foundation or Zorra. Among his most successful pieces on Foundation, a Daft Punk toy face that sold for nearly 8 Ethereum (ETH) which converts to about Rs 13 lakh.

“The biggest boost I got from NFT was the value added to digital art. Earlier you would only hear about traditional art being auctioned off at such prices. NFTs have made it possible for digital art now to be collected. It has given my work a lot of exposure at a global level,” Singh, who has sold nearly 35 such pieces, told indianexpress.com. And yes, most of his collectors are outside India.

Singh’s advice for creators planning to get into the NFT space is to read up about the technology. “The first artwork holds good value because it’s your first. A lot of collectors want to collect this ‘Genesis piece’. But you have to learn the technology because it will really benefit you. The biggest challenge about NFT is you have to market yourself, you have to brand yourself. The marketplaces don’t necessarily promote artists,” he explained.

Just like Singh, 37-year-old Kochi-based photographer Hari Menon is also relatively new to the NFT space. But he too has found that what NFTs get him per photograph is unlikely to get replicated in the real world. Menon, who is just short of 100k followers on Instagram, has listed his works on Foundation as well and is hoping to get into Superrare, another exclusive platform for NFTs soon. One of the Daft Punk Toy faces by Amrit Pal Singh, which sold for nearly 8 ETH on the Foundation. (Image screenshot from Foundation)

He says that while awareness is only growing in India, artists need to be sure which platform they list their work, because collectors matter. “If you put on Superrare, you have a ready base of collectors who are willing to spend,” he told indianexpress.com.

Menon, who has sold five of his photographs as NFTs so far and one collaborative work on the Foundation, believes the number of collectors will start growing in India as time progresses.

Ramesh Gopal, a 36-year-old blockchain developer based in Bengaluru, is one such early collector, who has a lot of faith in the potential of NFTs. In his view, one worry with digital art is that it can be copied and replicated. NFTs solve this problem. “If you know the artist actually minted it, it is there in blockchain history,” he tells indianexpress.com. 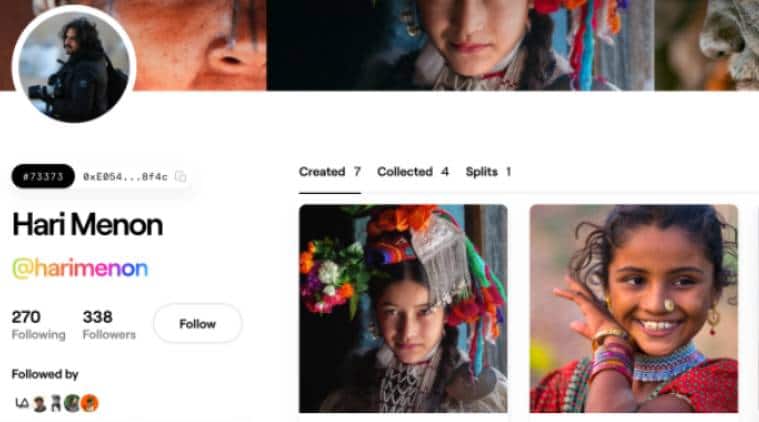 Hari Menon who is just short of 100k followers on Instagram, has listed his works on Foundation as well

And Gopal wanted to get into the space as early as possible before more collectors swoop in. “I do the collection and also take it as an investment. People who are going up into this space quite early, the artists, they are actually very successful and some of their works have good success in the secondary market,” he points out.

Gopal is right about this being a market with huge potential. The NFT marketplace saw sales worth $2 billion in the first quarter of 2021 alone, a 2100 per cent increase from the earlier quarter, according to a report by NonFungible.com. He’s also hoping that the Indian government quickly regulates cryptocurrency. “Since the NFT space itself is very less understood, especially in terms of legality, it is holding back collectors,” Gopal says. It should be noted that RBI has recently clarified that investments in cryptocurrencies such as Bitcoin or Ethereum are not illegal per se.

But while NFTs as an idea is exciting and hold immense potential for artists such as Singh and Menon, they are not an easy way to make a quick buck. Success in this space is not guaranteed for all. “The NFT itself is a tool that allows someone to sell a digital file. Now if that digital file is meaningless, not interesting, and has no story behind it, the NFT does not magically make it valuable. But the tool is very powerful in the hands of talented people because now they have this ability to sell their work directly online in a global market,” Kayvon Tehranian, founder and CEO at Foundation tells indianexpress.com.

The company’s ‘foundation.app’ has emerged as one of the more premium platforms where artists and collectors can come together to pursue interests in NFTs. And it is a platform where serious artists, including those from India, are eager to be listed.

While the hype cycle around NFTs is good, what really matters, according to Tehranian, is that space is about decentralisation. Just as blockchain and cryptocurrency are all about decentralising control over money, NFTs are doing the same thing to art and the value attached to it.

Foundation doesn’t see itself as the “decider of what is good and bad,” Tehranian clarifies. Rather they view themselves as facilitators, where even an artist sitting in New Delhi can sell their work to collectors based in London or New York without worrying about logistics or currency. “Foundation isn’t America-centric.”

But he also stresses that creator who has been at it for years, who built their reputation, and most importantly their audience is the ones who can really benefit from NFTs. And Singh is one prime example of this in his view.

“Amrit is emblematic of someone who has been exploring digital expression for a very long time, and his work has just found a tremendous market in NFT,” Tehranian explains, adding that Singh’s success on NFT also gives him “provable history on the blockchain, for his work,” a history that cannot be erased and is much more powerful than a mere Instagram page.

And clearly, the potential of NFT creations is not lost on Indian companies either with platforms like WazirX entering the space in April this year. Vishakha Singh, Vice-President at WazirX NFT, admits that while NFT has become a ‘huge buzzword’ with no ‘dearth of creators’, only “authentic sincere creators who have been at it for years and years,” are the ones who will succeed.

Being a newer platform, WazirX also has certain signals they look for when onboarding artists and creators to the platform. One of the most important was that the artist should have previously dropped an NFT because it shows two things, according to Singh. The first being that the artist has some understanding of the technology, and second they have some presence on global platforms. The latter is an indicator that the person has a level of authenticity.

Singh also said they look at the social media currency of artists as well as whether the person has received media coverage in the recent page. When asked why the social media handles matter, she said in case the Instagram handle has been created very recently, it is a red flag that perhaps the artist in question could just be using someone else’s work.

“A collector who comes on our platform needs to be assured of the fact that these are unique authentic real credible creators.”

Horizon Blockchain Games raises $4.5M for blockchain games like Skyweaver – VentureBeat
What are stablecoins? A blockchain expert explains – The Conversation US

Euphoria in digital art: A…

The Power of NFT: How…

Non Fungible Tokens and the…

As Demand for NFTs Endures,…

What Are Non-Fungible Tokens, And…